The Lady Eagles secured a pair of victories in the Victory Christian School Tournament to take home a championship trophy as they improved to 14-2 overall. 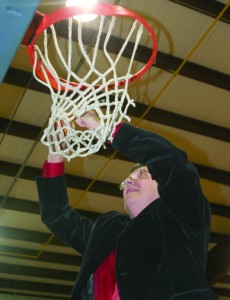 “I think the girls played exceedingly well,” said Bethel Christian Academy skipper Ashley Byrum. “We had some easier contests coming in and we needed the tough game we got against Fairfax as we prepare for Gramercy Friday night.”

The opening victory for the Eagles came over Bethel Christian Academy of Kinston when the Askewville-based school won 57-18.

Kelsie Conner, the tournament’s Most Valuable Player, recorded a double-double in Friday’s game as she scored 12 points and brought down 11 rebounds. She came close to a triple-double as she also had eight steals.

Sophomore Jessica Howerton led the way offensively with 16 points for the Eagles. Elizabeth Farmer added nine points and five assists in the outing.

Kristen Adams, Alyssa Fairless and Taylor Thomas chipped in six points each during the victory. Adams added six steals while Fairless had a pair of rebounds and a pair of assists. Thomas contributed seven boards to the winning effort.

Rounding out the scoring was Charitee Dunlow, who had two points to go with seven rebounds and five assists.

Saturday’s championship game was much closer, but the Lady Eagles were able to use a stellar fourth quarter defensive stand to beat Fairfax 50-37.

The Lady Rebels actually led 12-11 after one quarter, but Bethel outscored their opponents 11-5 in the second period to take a 22-17 lead at the intermission.

“We were down by one after the first quarter, but I think the girls realized we were capable of playing with them,” Byrum said. “Once they realized that, they went out there and did it.”

The third quarter was a solid offensive outing for both clubs with the Lady Eagles outscoring Fairfax 18-17 and holding a 40-34 lead heading into the final quarter.

It was there the defense really stepped up as they held the Lady Rebels to just three points and went on to the 50-37 victory.

“The offense was pretty steady all night, but the defense really picked it up in the fourth quarter,” Byrum said. “We got the effort we needed and that helped us win against a very good opponent.”

Conner again had a stellar performance, recording her second double-double of the tournament with 23 points and a dozen rebounds. She added three steals in the contest.

Adams and Dunlow had four points each for the Lady Eagles. Adams added six steals and seven assists while Dunlow had six rebounds and four assists.

The win boosted the Lady Eagles to 14-2 overall as they head into Friday’s home game with defending state champion Gramercy Christian School.