The bride is the daughter of Billy and Diane Dunlow of Windsor. She is the granddaughter of Orval and Ruby Williams of Edenton and the late Lloyd and Mary Dunlow who made their home in Windsor.

The groom is the son of Jerry and Barbara Reid of Kernersville. He is the grandson of the late Dewey and Clarice Reid, formerly of Kernersville, Hattie Varner of Asheboro and the late Lester Varner.

Officiates of the ceremony were the Rev. Frances Browne of High Point, friend of the groom’s family, and the Rev. Gary Williams of Zebulon, uncle of the bride.

After a charge given to the couple, they celebrated the Ordinance of Holy Communion as their first act as husband and wife.

A program of wedding music was provided by Roberta Hoggard of Windsor, friend of the couple, Corrine Twiddy of Edenton, aunt of the bride, Jonathan Brower, cousin of the bride, and Gary Brower, uncle of the bride, both of Edenton. The congregation was led in the praise song, “Glorious Day”, by the bride’s uncle.

The bride was escorted by her father to the piano arrangement, “Sunshine In His Presence,” written and recorded by the bride’s mother just for her on this special day.

Kellen Reid of Chapel Hill served as his brother’s Best Man. Groomsmen were Christopher Copeland and Brandon Copeland of Windsor, friends of the groom, and Chris McIntyre of Greensboro. Junior groomsmen were Dylan Gainey and Ethan Hamilton of Edenton, cousins of the bride.

A rehearsal dinner, hosted by the groom’s parents, was held on the eve of the wedding at Bistro 390 Restaurant in Edenton.

After a waterfront tour of downtown Edenton, the bridal party arrived at the reception on the Edenton Trolley. A wedding reception and dinner, hosted by the bride’s parents, was held at the American Legion Hall in Edenton.

The couple’s honeymoon was spent at the Biltmore Inn at Biltmore Estates. They will reside in Raleigh and Windsor for the present time.

Gretchen is a graduate of NC State University where she received a Bachelor of Science in Biology and minor in Biotechnology. She is employed by Syngenta in Durham as a research scientist.

Jeremy is a graduate of UNC-Greensboro where he received a Bachelor of Arts in History and Social Studies and minors in Anthropology and Classical Civilization. He is a Senior Trooper and Field Training Officer with the North Carolina State Highway Patrol’s Troop A/District II office.

Dec. 25, 2010 – Family engagement dinner hosted by the groom’s parents at their home in Kernersville. 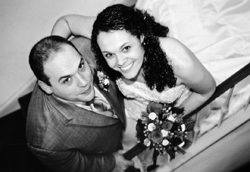