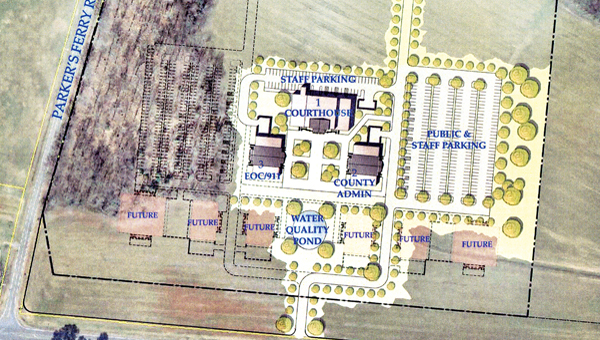 This is a rough draft of the proposed site layout of the new Hertford County Courthouse to be constructed on land donated to the county by the Riversedge developers.

WINTON – A rough sketch has been developed for the proposed site plan of the new Hertford County Courthouse.

At the most recent meeting of the Hertford County Board of Commissioners, chairman Curtis Freeman handed each board member a copy of that site plan.

“This is a drawing of how the new courthouse will potentially sit on the site (at the Riversedge property) and how the grounds and facility will look,” Freeman said.

The drawing shows the courthouse, parking areas, the proposed E-911 Center and the area where county administrative offices may be located if that part of the plan does come together and approved by the commissioners.

“If there are future plans down the road – 10, 20 or 30 years from now – the drawing also shows those possible buildings as well,” Freeman noted.

There were two rough drafts crafted by Ware Bonsall Architects, the firm hired by the county on the courthouse project, showing how the facilities will be situated on the property. One had all the buildings facing Parker’s Ferry Road while the other showed those facilities facing US 158.

“I feel having the buildings facing 158 is a whole lot better, it looks better,” Freeman stressed.

After the meeting, Hertford County Manager Loria Williams told the Roanoke-Chowan News-Herald that the courthouse project at Riversedge was at a standstill until property surveys can be completed.

As far as possibly locating the county administrative offices as well as the tax, land records and Economic Development offices into a stand-alone building adjacent to the new courthouse, Williams said that remains “up in the air.”

The proposed new E-911 Center, to be located on the same property, is still a reality. However, Williams said the county has missed the deadline to apply for the upcoming round of grant funds to pay for that construction.

“There is another grant funding cycle coming up,” she said. “We’re putting some numbers together on what it will take to build the E-911 Center. There’s still some consolidation (grant) funding available. We’re putting a proposal together.”

The county has plans to build an $8.2 million courthouse. If other county offices, other than the proposed E-911 Center, become part of the project, that cost escalates to $10 million.

While the current plans reveal that most of the pre-construction work for the new courthouse are centered at the Riversedge property, which was donated to the county, Williams confirmed that the offer made several months ago to purchase 25 acres from Percy Bunch of Murfreesboro (to construct the facility) remains on the table. She said that “option to purchase” agreement was good for 120 days. If the county opts not to exercise that option, the agreement expires at 5 p.m. on May 16 and Bunch will keep the $100 paid by the county, money that prevented him from renegotiating the previous terms agreed to (the purchase of approximately 25 acres for $7,500 per acre) or offering the same property to another prospective buyer.

That option to purchase agreement was formally extended and accepted by Bunch on Jan. 17.

During the public comments period earlier in last week’s commissioners’ meeting, Byron Simonds, a candidate seeking to unseat Commissioner Howard Hunter III, went on the record to say that based on the majority of county citizens living on annual incomes of $35,000 or less, it was “clear that this board was out of touch with the citizens of this county” (based on their proposal to build an $8.2 million courthouse).

Citing numbers from the U.S. Census, Simonds stated that approximately 16 percent of county citizens live on a fixed income.

He added that Hertford County has an unemployment rate of 11 percent and the state, as a whole, has the fifth highest jobless rate in the nation.

“Our citizens and businesses are trying to make it on a fixed income, low income or no income,” Simonds said.

“This was done during a down year for the economy, yet property values increased, some significantly,” he noted. “Our tax rate is the highest in the area.

“If there’s light at the end of the tunnel, it’s just a flicker. Hertford County has a long way to go before we can all stand again in the daylight,” Simonds concluded.