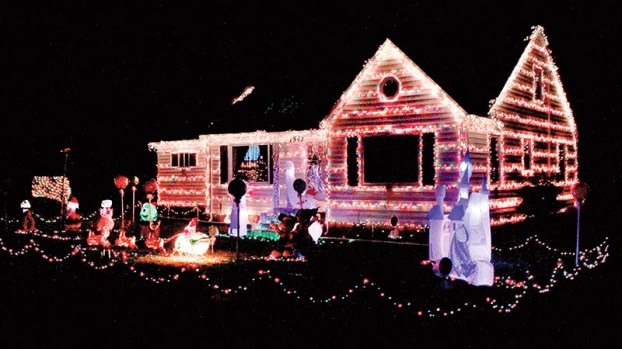 The home of Dan and Bobbi Johnson on Doolittle Mill Road in Milwaukee serves as a popular stop for those who enjoy the bright colors and displays of the Christmas season. | Staff Photos by Cal Bryant

MILWAUKEE – It’s a labor of love that rolls around each year.

And for Dan and Bobbi Johnson of Milwaukee, that labor reaps the biggest reward of all – smiles, lots of smiles.

The Johnsons launched a family tradition three years ago at their quaint home located on Doolittle Mill Road here in this Northampton County village. Every Thanksgiving night they light up their home with festive and colorful lights of the season. Each year that display has grown in size, and judging by the number of visitors, in popularity as well. 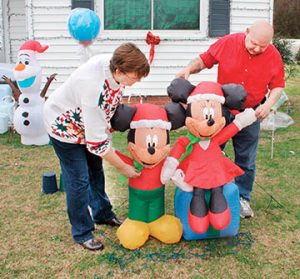 The couple is shown making last-minute adjustments to one of the many holiday decorations that line their front yard.

Dan is a native of Milwaukee, living there on and off since 1959.

For Mrs. Johnson, a native of Michigan, she and her future husband met online after the death of her first spouse. She was living in Virginia at the time.

“We hit it off right from the start and got married 12 years ago,” said Bobbi.

For the new Mrs. Johnson, moving to rural northeastern North Carolina was not much of a culture shock.

“The place I’m from in Michigan is a small town; we had one stoplight, and that was a blinking light,” she smiled. “There, everybody knew everybody, just like it is here. So Milwaukee is just like home to me, just with a different zip code.”

Dan, disabled, formerly worked with security firms, as well as serving as a bail bondsman. Bobbi, who pulled a four-year hitch in the U.S. Navy, is a now an LPN, working with the Rural Health Group at its Scotland Neck office.

“When I first met Dan, he didn’t even put up a tree in his house at Christmas,” Bobbi noted. “That was not an option for me….there had to be a Christmas tree. Then we started adding a few light on the house, beginning with the gutters. A couple of years ago we started adding a couple of holiday-themed blow-ups in the yard.”

All it took to get the Johnson display to today’s standards was Bobbi’s vivid imagination and Dan finding a sweet deal on Christmas lights at an after-holiday sales event.

“He purchased about 20,000 lights and our display just exploded from there,” she said. “From where we started to where we’re at this year, we have roughly 40,000 lights, to include those on the barn that we lit up for the first time this year.”

“I don’t have enough house to put up the lights she wants us to have,” Dan chuckled. “Whatever we have on display this year, she is already planning how to add to it next year.”

Other than the barn lights, complete with a line of lit candy canes leading to the outbuilding, this year’s newest addition is a laser light show, displaying Christmas-themed figures and words that move along the roof of the house. Christmas music is also part of the newest attractions at the Johnson’s outdoors display.

That is in addition to 10 inflatable figures, to included Santa Claus, his sleigh and a team of reindeer.

Mrs. Johnson also created large lollipops to add to the front yard display. She said the idea was simple….gluing a large, colorful ball to the suction cup of a plunger; placing the plunger’s handle into a small diameter piece of PCV pipe (that’s stuck in the ground) and wrapping the ball in clear plastic, complete with a bow. 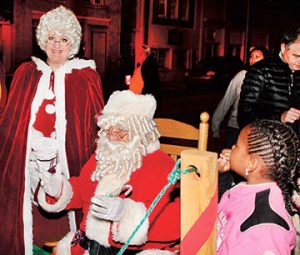 Dan and Bobbi Johnson also serve as Santa and Mrs. Claus at numerous local events during the Christmas season. Here they are shown waiting to hear from youngsters at last weekend’s tree lighting ceremony in downtown Ahoskie. | Staff Photo by Gene Motley

“If the weather is bad, rainy or windy, we do not cut on the display,” noted Bobbi.

Thursday night, a van load of visitors arrived at the Johnson home; parked and exited the vehicle for an up-close look at the festive lights and laser light show.

“We get that all the time,” said Dan, referencing traffic coming to a stop in front of their home.

He also said their immediate neighbors and others in the Milwaukee community now make it a habit to come on Thanksgiving night for the annual first lighting of the display.

“The neighbors look forward to it, especially the children,” Dan stated.

The Johnsons thanked members of their family in helping to erect the display on an annual basis. Those family members include Daniel Jones and his son Ethan, along with Gary and Michelle Dilley and their children, Madysen, Macylen and Grayden.

“We put up our Christmas tree inside the house on Thanksgiving Day every year,” said Bobbi. “The grandkids help with that while the adults work to complete all the lights and the displays outside.”

Dan and Bobbi Johnson are also well known for another Christmas tradition….playing the roles of Santa and Mrs. Claus. For Dan, it started by chance when a friend that works at Halifax Regional Medical Center in Roanoke Rapids found herself in a pinch when an individual scheduled to play “Santa” was a no-show.

“They needed a Santa, and I had did that once or twice back in the 1980’s so I volunteered,” he said. “Everything felt right about doing that again, especially seeing the smiles on the faces of the children and the adults. We wound up ordering a Santa suit and a Mrs. Claus outfit four years ago.”

Since that time, the Johnsons (aka the Clauses) have filled the roles of Jolly Old St. Nick and his wife at local parades, nursing homes and schools.

The true meaning of Christmas has also struck accord with the Johnsons.

“Over the past couple of years we select a family at Christmas that’s down on their luck,” Dan said. “We go knock on their door, dressed as Santa and Mrs. Claus, and I have my bag with gifts. We try to make their Christmas as best as we can.”

Up until this year, the Johnsons reached inside their own pockets to purchase the gifts for the families in need.

“Now we have a couple of people helping us with those purchases,” said Bobbi. “This is the first year we’ve accepted donations for that.”

“It’s something that just touches our hearts,” stated Dan. “This is the best present you can give to yourself….helping someone who needs it. This is the most gratifying thing I’ve ever done in my life.”

Johnson said the key in portraying such an important role is knowing how to talk to kids.

“I’ve stayed in touch over the years with Curtis Allen over in Ahoskie; he played Santa for about 12 years until his health wouldn’t allow him to do it any longer,” said Dan. “He and I both agree that playing the role of Santa is much more than putting on a red suit and a white beard….you’ve got to know how to talk with and interact with children.”

Referencing the old Art Linkletter TV show – “Kid’s Say the Darndest Things” – Bobbi recalled a conversation the couple, dressed as Mr. and Mrs. Santa, had a few years back with a little girl.

“She told us that all she wanted for Christmas was for her mother and father to be happy again,” Bobbi said.

“And does Santa say to that….I remember telling her that sometimes mommies and daddies can’t afford everything their children want for Christmas and sometimes the best present you can give your mommy and daddy in return is to smile and be happy,” Dan remarked. “When you are happy with what they’re able to give you, then they’re happy in return.

“I didn’t prepare that answer, it just came up,” Dan added.

The fact that the Johnsons are the proud grandparents of nine children serves them well when it comes to dealing with young people.

“We love our young’uns,” Dan said.

And, with the steady glow of lights filling the night sky over Milwaukee, the Johnsons also love and welcome complete strangers as well.

To visit the display, turn off NC 35 onto Doolittle Mill Road in the heart of Milwaukee. The Johnson home is less than a quarter-mile on the left…..you would be hard-pressed to miss it.

The display will be active nightly until the New Year’s holiday.

For those unable to travel, see the lights – and the couple as Mr. and Mrs. Santa – on Facebook at Conway/Milwaukee Santa & Mrs. Claus.