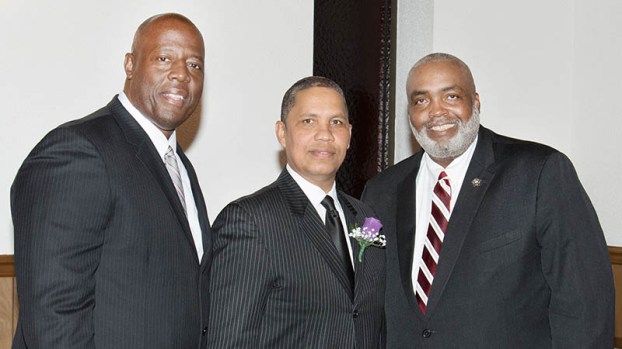 LEWISTON – Members of the Ahoskie Alumnae Chapter of Delta Sigma Theta Sorority, Inc. presented their 38th annual tribute to the Rev. Dr. Martin Luther King, Jr. on his actual birthday, Sunday, January 15, 2017 at the Mount Olive Missionary Baptist Church in Lewiston. The theme for the program was “Hate Cannot Drive Out Hate – Only Love Can”.

The Worship Leader for the evening was the Honorable Ernestine Bazemore, Bertie County Commissioner.

The congregation was entertained with Javion McMillian of Robersonville as he presented Dr. King’s famous “I Have A Dream” speech.

The Ahoskie Alumnae Ensemble and Community Choir that included several members of the Ahoskie Alumnae Chapter and friends of the community provided beautiful music throughout the program. Musicians were Andrea Canada and Keith Urquhart.

Charlene Jones presented the program’s Spiritual Reading that was followed by Rev. Leola Mitchell with prayer.

Special guests in attendance were recognized by Shavonda Pugh. Jean M. Cherry had the pleasure of recognizing the 2017 honorees of the Dr. MLK Drum Major awards. Recipients of the awards were Bertie Sheriff John B. Holley, Jr. and retired Hertford County Sheriff Juan E. Vaughan, Sr. The men were recognized for outstanding services they provide (past and present) in law enforcement in their respective counties.

Genia Canada invited attendees to worship in giving with the Offertory Appeal. Tundra Woolard of Alpha Kappa Alpha Sorority, Inc., Ricky Freeman of Omega Psi Phi Fraternity, Inc., and Daphne Jacobs of the Ahoskie Alumnae Chapter of Delta received monetary donations for the program. The Offertory Prayer was given by the Honorable Judge Cy Grant.

Assata K. Buffaloe of the Ahoskie Alumnae Chapter had the honor of introducing her husband, Eddie M. Buffaloe, Jr., as the guest speaker. Mr. Buffaloe is Chief of Police in Elizabeth City, appointed to this position on December 1, 2012. He has B.S. and Master’s Degrees in Criminal Justice Administration. He began his law enforcement career in November 1991 as a correctional officer with the North Carolina Department of Correction at Odom Correctional Institute in Jackson. Former career positions of Mr. Buffaloe include Drug Enforcement Agent in Northampton County, Drug Enforcement Supervisor in Halifax County, and Lead Investigator for the East Force Drug Task Force through the U.S. Attorney’s Office in Raleigh.

He is the father of Bryan, Mike, and Aren and the youngest son of Mr. and Mrs. Eddie M. Buffaloe, Sr. of Potecasi. Buffaloe is a member of the Delta Iota Chapter of Omega Psi Phi Fraternity, Inc.

Mr. Buffaloe’s message was entitled, “Peace! Be Still!” Key quotes from Mr. Buffaloe’s message: “Like Dr. King, many of us grew up in the church, were nurtured by the church, and found our vocation in the church. But as much as I love the church, I am disappointed in what we have become and our collective reputation has suffered. But we can change through the unity of peace. In order for each community to change, the HEART must change! What would happen if faith communities returned to the forefront in the fight for justice? The church was the centerpiece of the communities’ décor. What would happen if instead of just giving money to missions, we participated in them? The church should focus on changing the missions within their own communities. What would happen if we participated in the cause of justice within the church? For one thing, we would be participating in the creation of the beloved community that Dr. King dreamed of. We would be co-creators with God in bringing about the Kingdom here on Earth. I Peter 3:11 reminds us….. “they must turn from evil and do good: they must seek peace and pursue it.” As Dr. King dealt with the issues of the oppressed he did so with powerful protect in peace; Dr. King also believed in putting the issue where it is supposed to be; just like the Israelites who addressed their issues right there at the walls of Jericho. Having Unity and Peace is how We Shall Overcome.”

Following Buffaloe’s powerful message, Brianna Wesson, the reigning Miss Jabberwock of the Ahoskie Alumnae Chapter, led the Litany of Rededication for all in attendance.

Patricia Myrick presented the Financial Report of monies donated to the program, to the Dr. King Center, and to Social Action projects of the Ahoskie Alumnae Chapter.

Hope Eley presented Words of Appreciation and read letters from invitees who could not attend the program because of previous engagements but felt honored to be invited to a tribute that honors Dr. King.

Linda McNair-Moore, President of the Ahoskie Alumnae Chapter, gave closing remarks. Everyone in attendance participated in the closing selection, “We Shall Overcome”. Rev. Alma O. Lucas provided the Benediction.