AHOSKIE – It may not have been a record afternoon of baseball between these two…but it was close.

Last Thursday when Ridgecroft School and Northeast Academy finally met on the baseball field (twice before, their game had been postponed due to weather); it would be to settle the top spot in the Tarheel Independent Conference.

Both had seen the other play after both participated in the Sgt. Will McLawhorn Memorial Scholarship Tournament held on Northeast’s field during Easter break.  Each team got a win over Northampton County, but each also fell to eventual champ, Hertford County High.

The featured showdown was a five-inning slugfest here with 33 runs scored. It may have been four hits from Luther Glover that helped lead the Rams to what turned into a rout of the Eagles 22-11. 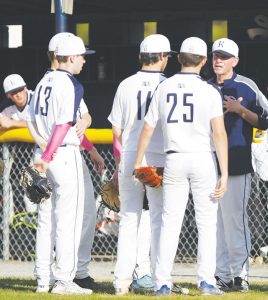 Ridgecroft School baseball coach Mike Basnight (right, in blue) has his Rams in first place in the Tarheel Independent Conference with a 6-0 record after their 22-11 win last week over rival Northeast Academy. | William Anthony Photography

The Rams got on the board first with four first inning runs. Glover’s two-run blast was the biggest blow as the others scored on a passed ball and an error. Northeast’s first run came in their half of the first before Ridgecroft got it right back for a 6-1 lead after an inning and a half.

But Ridgecroft would take the lead for good with five runs in the third inning. In that frame, Glover singled on a 2-1 count, scoring one run, Jack Jones doubled on a 1-2 count, scoring two runs, Rowe induced Bryce Stevens to hit into a fielder’s choice, but a run scored nonetheless, and an error scored the last run of the inning and made the score 11-10.

But the ‘hit parade’ kept going in the top of the fourth as a pair of singles and a stolen base had two runners in scoring position. Jones’ groundout scored one, and Boone Barkley’s base-hit scored the other while Barkley came around on a fielder’s choice; 14-10, Ridgecroft.

Northeast got a run in the bottom of the fourth on a passed ball and it was a three-run game, 14-11.

The Rams notched eight more runs in the fifth inning. Joyner, Jones, Whitley, Askew, and Lane Slachta each drove in runs during the inning that made for the final score.

Slachta started for Ridgecroft lasting one and two-thirds innings, allowing nine hits and ten runs while striking out one. David Basnight got the win in relief giving up a run on two hits with one walk and four strikeouts.

Jones opened for Northeast on the hill. He allowed two hits and six runs over two innings. Taylor and Rowe entered the game from the bullpen, throwing one and two-thirds innings and one and one-third innings respectively, but Rowe gets the loss.

Ridgecroft had 13 hits in the game led by Glover, with Jones, Askew, and Slachta also managing multiple hits. The Rams tore up the base paths, as three players stole at least two bases. Stevens led the way with three.

Northeast Academy collected 11 hits. Jones, Rowe, and Taylor each managed two hits each for the Eagles.

Ridgecroft takes over first in the Tarheel Independent Conference at 6-0, 7-3-1 overall.  Northeast falls to 6-1 and 9-2 respectively.