WINDSOR – Of all the infamous dates in Bertie County history – which includes a pair of deadly tornado outbreaks in 1984 and 2011 – June 6, 1993 remains one of the most horrific. 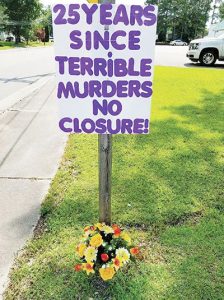 This sign, with flowers below, was posted Wednesday morning along South Granville Street near the former location of the Windsor BE-LO Supermarket where three people were murdered on June 6, 1993.

It was 6 p.m. on that Sunday when the BE-LO Supermarket on South Granville Street closed after another busy day. What happened between then and the time a frantic 9-1-1 call was later placed to the local authorities was a night of unspeakable violence that left three dead and two others seriously injured.

Now, 25 years later, the identity of the man responsible for this cold-blooded crime remains a mystery.

Those emergency responders to first arrive on the scene recall a scene like they had never seen over the course of their careers.

Current Windsor Police Chief Todd Lane told the Roanoke-Chowan News-Herald on Friday that despite the passage of time, this case remains an active investigation.

“We continue to investigate leads in this horrific case,” Lane stated. “We have and will continue to submit evidence to the state crime lab in hopes that advances in DNA collection and analysis will lead to a break in this case.”

The crime began with a man – later described by one of the survivors as a black male with medium complexion and slender build, around 6’ to 6’2” and weighing 175 to 200 pounds with a military-style haircut – approaching store manager Grover “Bud” Cecil. That unknown man, who was hiding somewhere in the store at closing time, then stole over $3,000 in cash and money order receipts.

Once all were gathered in the same spot, Cecil was ordered to use duct tape to bound the hands of the other victims. Cecil’s hands where then taped by the suspect.

Two-by-two, the suspect stacked his victims on the floor in three piles. He then opened fire with a handgun, sending one bullet into each pile and killing the person on top (Cecil, Reason, and cleaning crew member Johnnie Rankins) and injuring another (Sylvester “Tony” Welch). While Welch survived the bloody attack, he would succumb to cancer in 2005.

After his weapon jammed on the fourth shot, the killer rolled each victim individually onto their stomachs. He then left for a brief moment, returning with a knife he located in a back room of the store. He used that knife to stab a fifth victim (cleaning crew member Jasper Hardy) in the throat and back. The wound to the back was reported to be so forcefully inflicted that the knife broke off in the victim’s back.

Meanwhile, a sixth victim – Thomas Hardy also a member of the cleaning crew – was left unharmed.

When the carnage ended, the killer grabbed the stolen money he had placed in a grocery bag, the knife, and even the keys to the store and slipped away into the night.

After the killer left, it was Welch who would crawl, leaving a trail of blood from his gunshot wound, to the front of the store to phone for help. 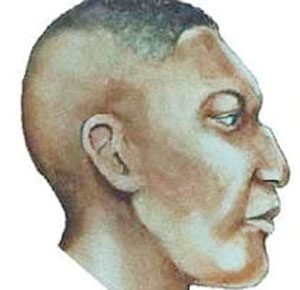 A composite sketch of the Windsor BE-LO murderer.

“It’s still the worst crime scene I dealt with in my 30 years as an agent,” said Ransome. “Plus, this crime happened only six blocks from my house….it happened in my town, so it’s personal to me.

“I ride by that location everyday while out exercising on my bike,” he added. “I still think about that night and then all the effort we put in trying to find the person responsible for this horrific crime.”

One thing that Ransome still finds intriguing about this case is all the “chatter” at the time of the murders that claimed the killer as a member of the military or perhaps a disgruntled former law enforcement officer who may have been fired from his job.

Like many in the small town of Windsor, Chief Lane and his officers travel past the former BE-LO Supermarket location every day.

“When looking over there you can’t help but think about the need for closure for the families who lost loved ones in this case,” he noted.

A reward of $30,000 remains on the books for information that leads to the arrest and conviction of the killer. Information can be shared anonymously with law enforcement by calling the Windsor Police Department at (252) 794-3111 or the North Carolina State Bureau of Investigation at (800) 334-3000.