POWELSVILLE – With Principal Melissa Grimes telling her staff that the North Carolina public school education standards will be their ‘Bible’, maybe it was appropriate that Three Rivers Academy (TRA) opened in a church.

Because of minor delays with their final inspection, the renamed Bertie County-area charter school held their first day’s student orientation at First Baptist Powellsville on Monday.

“Our children are partners, our parents are partners, we need everybody in order to be successful,” Grimes said as Three Rivers welcomed some 100 students in grades K-thru-7 to their first day of class in the church sanctuary.

When Greater Education Resources assumed the charter of the former Heritage Collegiate Leadership Academy, one of their conditions for assumption was opening on time for the 2018-19 school year.

“Traditional schools can do great things,” said TRA Executive Director Nick Shook, “But I also believe in schools of choice.” 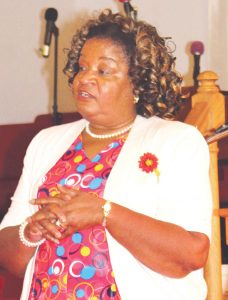 Grimes says she hopes the students and teachers will be in their classrooms at the former C.G. White Middle School before the end of this week.

Much of the controversy with the old HCLA and Three Rivers seems to have been eliminated as the school doors, make that church doors, opened on the first day.

Several teachers from the former charter school have melded with new instructors and staffers for the new school year. There’ll even be former high school teachers now instructing students in lower grades; and some teachers come to Bertie County from as far away as Fayetteville.

“They’re hoping to move to the area, and we have to give them the support they need,” Grimes added. “They know what the standards are, and they’re really doing a good job of helping each other.”

“The key is communication,” noted Shook. “Schools of choice actually began in Bertie County years ago, and now that’s what we have again; we have another school of choice.”