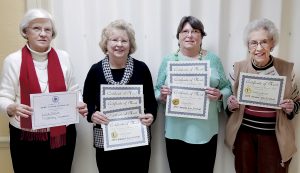 On Feb. 16, Hertford County students and young adults had their creative works featured at the District 9 Woman’s Club Arts Festival hosted by the Woman’s Club of Elizabeth City. Of the 159 District entries submitted for judging, Hertford County students and club women provided 34 pieces. Student entries from grades 1 through 12 plus adults included crafts, visual arts, photography, and literature. These entries had previously been deemed first place winners at the local Ahoskie Woman’s Club Arts Festival held at the Gallery Theatre in January.

After competitive judging, the 34 local entries earned 17 first place awards; eight, second place awards; six, third place awards; and three certificates of merit. A special thank you and congratulations are due to both classroom and art teachers of Hertford County for their dedication and their emphasis on student skill development and expressive techniques.

These entries will be part of the state Arts Festival competition sponsored by the North Carolina Greater Federation of Woman’s Clubs on March 9 in Mebane. This annual event is the largest student art contest in North Carolina.