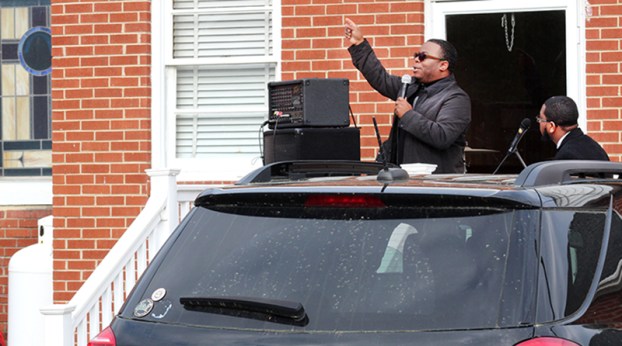 Rev. Dr. Akeem Walker of First Baptist Missionary Church in Powellsville delivers a recent Sunday morning sermon from the porch of the side-door entrance while his congregation remained seated in their cars, careful to abide by social distancing guidelines. Photo by Gene Motley

POWELLSVILLE – For invitation to worship, most ministers say, ‘The doors of the church are now open’.

However, in these days of the COVID-19 pandemic, that is no longer the case. Houses of worship have had to find more creative ways of servicing their parishioners.

After North Carolina Gov. Roy Cooper issued an executive order prohibiting most public gatherings of more than 10 people for the next 30 days, churches had to react in different ways. Some churches offer devotionals on Facebook and YouTube or other live and/or recorded platforms. However to get the ‘live’ feel of an ecclesiastical service some have resorted to drive-in church. 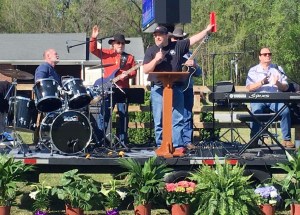 Joined by a praise band, Pastor Ray Faircloth, Jr. of Higher Ground Church conducts worship service from a podium of an outdoor stage on Sunday, April 5. He said there were approximately 130 individuals sitting inside 70 cars that turned out for the “drive-in” service. Contributed Photo

“I saw a couple of churches in Virginia, especially my home church of Oak Grove Baptist (Suffolk, VA), try it, and I talked to the pastor there about wanting to try it here,” said Rev. Dr. Akeem Walker of First Baptist Missionary Church in Powellsville. “That church has a congregation of about 700 every Sunday, but here we have much less and the population we serve here is about 90 percent seniors, so I said let’s try it.”

After canceling service on third Sunday (March 15) as a health precaution, Walker held his first outdoor observance on March 22. His pulpit rostrum was moved outside and outfitted with a microphone connected to an audio speaker placed at the church side-door entrance facing the parking lot. The musician performed on an electric piano with drum accompaniment. Worshipers were able to hear the message in their vehicles, many with their windows rolled down.

“The first weekend it was nice outside, but chilly and a little gloomy,” Walker added. “I think I counted about nine cars.”

As word spread through the community – if no more than lookers-on who just wanted to see the novelty of an outdoor service – things picked up so much a special fifth Sunday service was scheduled.

“On that Sunday it was 18 cars, including visitors and curiosity seekers who saw the gathering and stopped by,” he acknowledged. “Then for this (Palm) Sunday we had a parking lot full.”

First Baptist Powellsville was not alone. Other churches who scheduled outdoor drive-in services included Higher Ground Church located on US-13 South of Ahoskie.

“We were grateful that the governor gave us the opportunity,” said HGC Executive/Worship Pastor Ray Faircloth, Jr. “Last Tuesday he sent down a commending memorandum stating as long as people stayed in their cars and maintained social distancing, then we could gather and the mass number would not apply.”

Faircloth says in addition to Palm Sunday, Higher Ground will also hold outdoor Easter service at 10 a.m., but will re-locate the venue to the church’s future property location west of Ahoskie on NC Hwy 42. It’s at that location where the future Higher Ground Church will be built.

“It was just a blessing to see all the cars and the people who came out,” Faircloth noted. “We just thank God for the opportunity to get together and worship as a church family. We had 70 cars and 130 people that attended.” 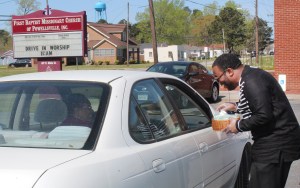 Tithes and offerings were also taken as trustees of First Baptist Missionary Church in Powellsville went vehicle to vehicle with collection plates while wearing masks and gloves. Photo by Gene Motley

Like Powellsville, Higher Ground also boasted a number of visitors who attended the proceedings.

“I hear it’s predicted to rain on Easter Sunday,” said Walker. “We hope to have our regular second Sunday service at 9 a.m. and I’m looking to see if we can navigate through that.”

First Baptist also held communion on Palm Sunday with the pastor passing out the bread and wine to worshipers in small sealed containers. Tithes and offerings were also taken as trustees went vehicle to vehicle with collection plates while wearing masks and gloves.

“While this is somewhat of an inconvenience, it’s forced the church to be creative and go outside the four walls,” Walker stated. “This is also the time when families are forced to eat together again, read the Bible, and pray together. It’s challenging, but I’m excited that it’s causing us to do things we were raised to do.”

“Now I’m wondering what will happen when we go back to church because I don’t think whatever it is we called normal will ever be normal again,” he concluded.