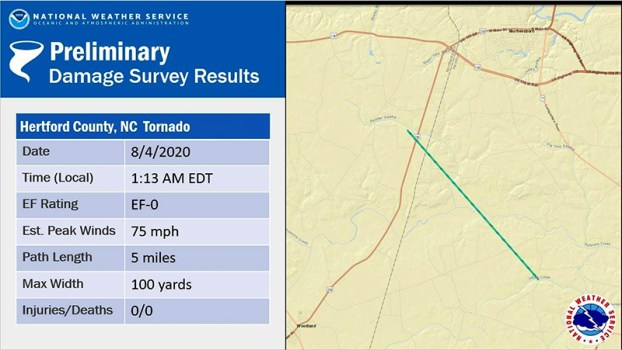 This map/info from the National Weather Service office in Wakefield, VA shows the path of Tuesday morning’s tornado in Hertford County.

A tornado that spun off Hurricane Isaias at 1:13 a.m. Tuesday in Hertford County has been classified as an EF-0 in intensity.

The National Weather Service office in Wakefield, VA made the determination today (Wednesday). Their assessment of the twister determined its peak wind speed was at 75 mph.

Using ground observations and weather radar loops, NWS officials established an area near the intersection of the St. John-Menola Road and Flea Hill Road as the tornado’s starting point. From there it traveled northwest for approximately five miles before ending just inside Northampton County along US 258 at Panther Swamp (one mile north of the PineTops Road intersection).

The majority of the structural damage occurred along Vinson Mill Road in Hertford County. Of the 40 structures damaged countywide by the hurricane, the majority were located on that road.

Smith added four families were forced to leave their homes due to the amount of damage. Two were able to find temporary shelter with other family members while the other two are being housed at a motel as part of a disaster relief effort offered through the American Red Cross.

Crews with the local power companies were close to completely restoring electric service on Wednesday morning. At the height of the power outage, nearly 4,000 homes were without electricity. That number was less than 375 as of Wednesday morning.