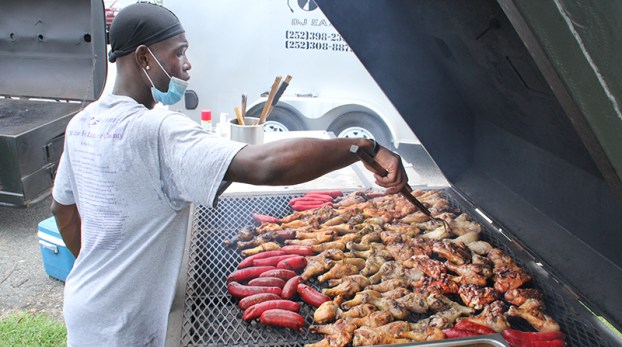 William Cofield checks on the chicken legs that we part of his grilling effort on Thursday morning near Windsor. Cofield and a group of volunteers served up lunch for free to those impacted locally by Tuesday’s deadly storm in Bertie County. Staff Photo by Cal Bryant

That’s exactly what William Cofield of Windsor did here on Thursday….firing up his charcoal cooker and slow-roasting chicken, sausage, hot dogs and a huge pan of baked beans to serve for free to anyone impacted by Hurricane Isasis and its accompanying tornado that left widespread local damage in its wake.

The cooker and serving table, staffed by several volunteers, was set up between the ABC Store and Abrams Barbecue located along US 13/17 south of Windsor. Abrams still bore the marks left by the hurricane/tornado as one of its catering trucks remains on its side, toppled by the high winds. 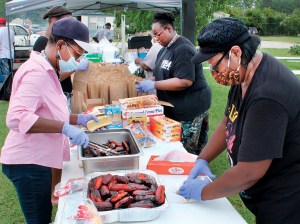 Hot dogs and red sausage are prepared to be bagged as part of the free lunch. Staff Photo by Cal Bryant

“The Lord laid this on my heart; people here are suffering after losing all they had in that tornado,” said Cofield, who was joined at the grill by his colleague, Eric Reid.

“We just decided this was the right thing to do right now,” Cofield continued. “We set up the grill and went to work cooking.

Cofield admitted to having another inspiration.

“This is what my granddaddy use to do,” he said. “He was always giving back to others. So I felt the need to follow in his footsteps.

“I just want to put a smile on somebody’s face,” Cofield added.

Cofield said his original idea was to just grill some hot dogs and bag them up with chips and a soft drink.

“I put it out on Facebook and the replies were more than I thought,” he noted. “So I decided to add more food, to include the chicken and the sausage.”

He added that some of the food was donated; the remainder was paid for out of his pocket.

“We set up this morning around 10:30 and fired up the grill,” Cofield said as he carefully turned the chicken over the fire. “We’re just waiting for 12 o’clock to get here; that’s when we told everyone that we would have everything ready.”

And, right on cue, a vehicle pulled close to become the first in the drive-thru pick-up line…..all courtesy of a man with a simple vision to help those in need.