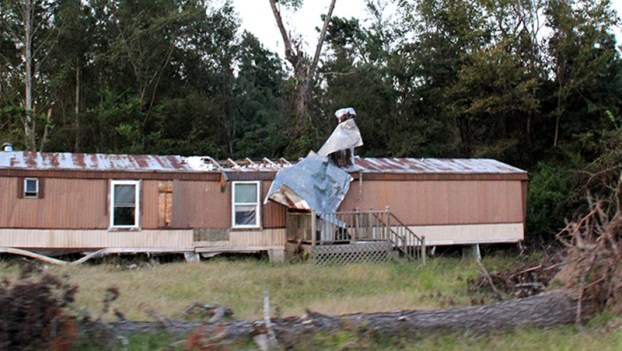 The roof of this mobile home on Vinson Mill Road in Hertford County was peeled back when a tornado, spawned by Hurricane Isaias, struck the area, to include Pine Tops Road, in the early morning hours of Aug. 4. Staff Photo by Cal Bryant

While the application period has ended for state assistance to Bertie and Hertford County citizens impacted by tornadoes that spun off Hurricane Isaias on Aug. 4, both counties may be able to recoup some of the money they expended during the storm’s aftermath.

This announcement comes at a time where officials in both local counties are estimating combined property damage in excess of three million dollars.

Governor Roy Cooper has requested a major disaster declaration from the federal government to help defray some of the costs the counties incurred.

“Unfortunately, North Carolinians are tested frequently by extreme weather and hurricanes,” said Cooper in a press release. “This application for aid from our federal partners will help us rebuild stronger and smarter, so our communities can recover from the damage done by Hurricane Isaias.”

If approved, the major disaster declaration would provide federal funds to help reimburse county and state governments and some non-profit organizations for some of the cost to respond to the storm and repair damaged infrastructure. It also would provide federal help pay for debris removal as well as search and rescue operations, hazardous material clean up assistance, meals, generators, fuel and more.

Hertford County Emergency Management Director Chris Smith said the county is still in the process of shoring-up the exact amount incurred for protective measures, but estimated it at a shade over $7,000.

“The other costs are a little harder to give you because DOT – with their debris removal and repairs to roads and bridges – and Roanoke Electric Cooperative report directly to the state for the other categories,” said Smith. “But it is estimated DOT spent $85,000 and Roanoke Electric spent $16,000. The county as a whole has to meet the $94,729 threshold to be eligible.”

Smith added that the Town of Murfreesboro had some reimbursable expenses.

“That would also go towards the county’s threshold requirement, but I’m not sure on that amount as they apply for the town,” he said.

As far as the damage to private property, Smith said 39 homes were affected. Of those, 16 had major damage.

Smith said the total estimated loss due to damages to structures from Isaias in Hertford County was a little over $1.4 million.

“The owners of those affected county residences were eligible to apply for assistance due to us being a contingent county of Bertie, who qualified for IA (Individual Assistance) from the state,” Smith noted.

Meanwhile, the level of damage in Bertie County, where a tornado tore through several neighborhoods and claimed two lives, was more severe. Emergency Services Director Mitch Cooper said the up front costs expended by the county for storm response is estimated at $250,000.

A survey of the property damage in Bertie revealed approximately 150 homes were impacted in some way. That number includes 26 residences that were totally destroyed, and 10 with major damage.

Bertie County Tax Administrator Jodie Rhea said the property value loss alone is $905,000 while the repair/replace costs for the damaged/destroyed residences is estimated at between $1.5 million and $2 million.

Hurricane Isaias made landfall on Aug. 3 near Ocean Isle Beach and caused major flooding in several communities. Four deaths were attributed to the storm that spurred several tornadoes, damaged water supply lines, roads and bridges and knocked out power to more than 375,000 homes and businesses.