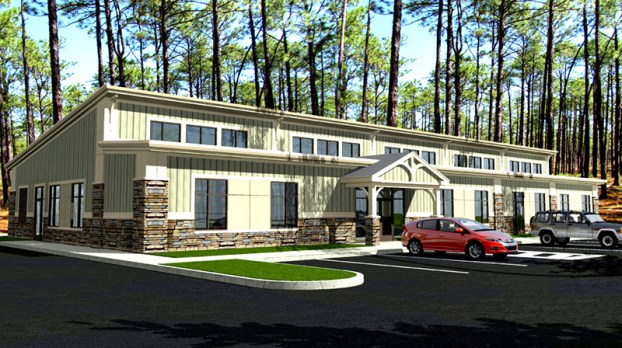 The regional office for the Atlantic Coast Pipeline, located near Pleasant Hill in Northampton County, was completed in October of 2019. Now that plans have been abandoned to construct the three-state, 600-mile pipeline, Dominion Energy plans to sell the building. Contributed Photo

PLEASANT HILL – The Atlantic Coast Pipeline (ACP) project, which was to bring natural gas to underserved areas, was canceled in July 2020. Now the developers are looking to clean up what was left behind.

The project spanned three states, starting in West Virginia before making its way south through Virginia and then North Carolina. A portion of the 600-mile pipeline was to run through Northampton County, which would also be the site of a compressor station and a regional office near the Virginia border.

“We have cleared and graded most of the roughly 10 miles of right of way in Northampton, and we plan to fully restore those areas,” said Aaron Ruby, Media Relations Manager for Dominion Energy.

A little over seven miles of pipe had already been laid in the county, and Ruby confirmed the company had reached agreements with the landowners to leave them in place.

A groundbreaking for the regional office and compressor station site, located just outside of Pleasant Hill, was held in April 2018. By Oct. 2019, Dominion Energy had the office completed and hosted a tour for local officials. At that time, no hires had been made yet to staff the office, but representatives from the company said they were committed to hiring locally to fill the 20 jobs that would be provided by the office and the compressor station.

The office, which was constructed by Roanoke-Rapids based Heaton Construction, was designed to be both energy efficient and environmentally friendly. They intended to apply for LEED silver certification which would acknowledge those features.

Now, Ruby said the company has plans to sell the Northampton office building.

A significant amount of work had also been completed at the compressor station site, including the installation of equipment such as a turbine compressor package, odorant injection system, vent gas recovery skid, hydrocarbon tank, and more.

The ACP was a collaborative effort between Dominion Energy, Duke Energy, Piedmont Natural Gas, and Southern Gas Company. Dominion Energy was the lead company in the project which was first announced in 2014 and was originally expected to begin service in 2019. But a series of lawsuits from environmental groups caused numerous delays and increased costs.

Opponents to the pipeline argued that the project was unnecessary and would cause harm to the environment and local wildlife, particularly where it would run through parts of the Appalachian Mountains. But pipeline supporters said it would help the companies transition towards alternative energy sources and would boost economic development along its route by offering better natural gas access for companies looking to move to the area.

Northampton County was projected at one point to receive as much as $1.6 million annually in property tax revenue from the project before it was canceled.

According to reporting from the Associated Press, work is now underway in all three states to clean up the incomplete project. Approximately 2,000 parcels of land across the 600-mile route had not been touched yet, while 1,100 parcels had tree-clearing and tree-felling already underway.

ACP installed approximately 31.4 miles of pipe in total before the cancellation. Like the agreements in place in Northampton County, the pipes already in the ground will remain there.

Additionally, the company is working to sell the unused pipe and other materials for the now-defunct project. But they reportedly have no plans to sell the easement agreements at this time.

The restoration work is scheduled to be complete by the end of 2022.