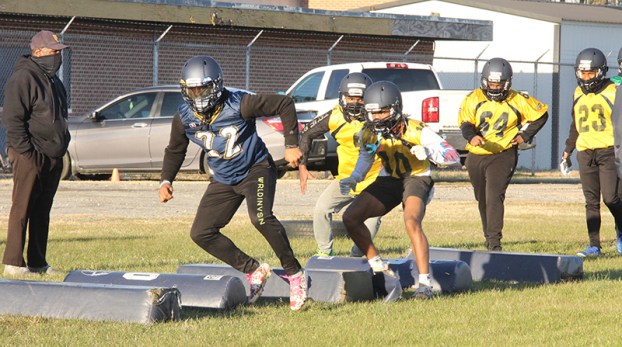 Hertford County High School opened the delayed start of the 2020 football season on Monday by holding a scheduled practice session. Shown here, HCHS players test their footwork during a drill. The Bears are scheduled to open their shortened regular season on Feb. 26 vs. Gates County. Staff Photo by Cal Bryant

AHOSKIE – The NFL season may be over, but high school football in North Carolina has just begun.

Due to the COVID-19 pandemic, the North Carolina High School Athletic Association (NCHSAA) halted the start of the 2020 football season this past August. After several rounds of discussion, NCHSAA officials moved the season’s start to February.

“It’s different practicing in the winter,” Saxby said. “We’re in sweatshirts and sweating a lot less than we would in the heat of August. The players worked hard on Monday and I expect they’ll quickly adjust to the change in the seasons.”

Saxby said all health safety protocols are being followed during the practice sessions.

“We’re limited in personal contact, but I still thought we had a very productive first practice on Monday,” Saxby noted.

Even though Hertford County Public School students are still engaged in remote learning during the pandemic, Saxby said a total of 75 players signed up for football this season.

“We have a few guys playing basketball right now, and I’m hopeful that some of the others will show up for practice,” he noted.

The NCHSAA is allowing teams to play a seven-game regular season schedule, which will end in April.

Bertie High School has chosen not to play football this season.