JACKSON – The next time they meet, there will be an empty seat on the Northampton County Board of Education.

Josephine Tyner Dunn, who just began her term on the board last year, passed away on Saturday, Feb. 27 after a brief illness.

Throughout her career, Dunn taught music for a number of years before also becoming a school principal in Northampton County. 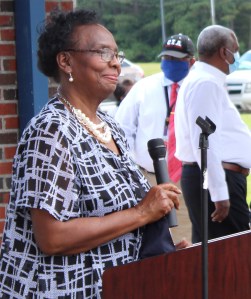 Josephine Tyner Dunn is shown in July of last year making remarks after being sworn in as a new member of the Northampton County Board of Education. File Photo by Holly Taylor

She was elected to serve a four-year term on the school board last March, filling one of four seats up for grabs. The new board members were sworn in at a socially-distanced ceremony in July. In her remarks at that ceremony, Dunn emphasized her focus on the future of education within the county, noting that it was the duty of each board member to help provide students with the opportunity to receive a sound education.

“Mrs. Josephine Tyner Dunn was a committed, dedicated educator who left a beautiful impression on students, staff, and community,” said Northampton Schools Superintendent Dr. Pamela Chamblee in a statement. “She relished treating people with dignity and respect which characterize who she was as a person, mentor, and friend.”

Dr. Chamblee described Dunn as a valiant person who offered much support and stood for what is right.

“Her untimely demise has left a gaping hole in our hearts as we try to understand why she had to leave us so soon. Her shoes are too big to fill and certainly cannot be replaced. We will miss her not only in the school system, but also in the community at large,” Chamblee concluded.

Board of Education Chair Rhonda Taylor expressed her sympathies to the family for their loss.

“It’s a shock,” Taylor said. “She will truly be missed. It’s a great loss, not only for the Board but for Northampton County Schools.”

“Since she’s been on the Board, she’s been a blessing. She’s had nothing but positive contributions,” Taylor continued. “She had so much knowledge when it comes to policies. If she didn’t know something, she would look it up.”

Taylor recalled that Dunn liked to ask a lot of questions at their board meetings to make sure she always had enough information to make informed decisions. Even at their most recent meeting, Dunn’s focus was on making sure the students and staff were safe to return to the classroom.

“She didn’t want any glory. That’s the type of person she was,” Taylor said. “Her main goal was the children. I saw how she touched the lives of students.”

Funeral services for Dunn will be held on March 5 at Nebo Baptist Church, Murfreesboro. Arrangements are being handled by T.L. Faison’s Funeral Care in Seaboard.