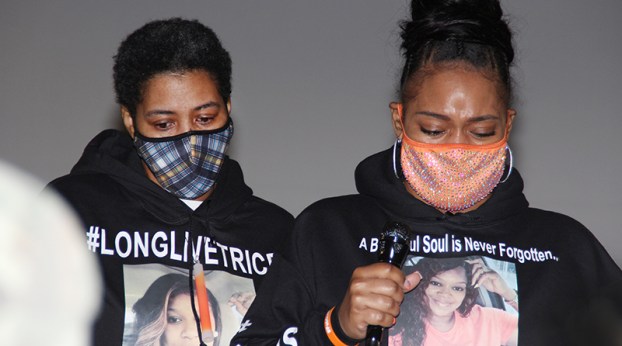 Wearing sweatshirts containing images of Patrice Matthews-Faison, Macy Reid (right) and Sarah Underwood spoke of their close friendship with Matthews-Faison prior to her murder on Jan. 22. Staff Photo by Cal Bryant

GATESVILLE – Delayed, but not deterred.

After seeing an initial attempt washed out by rain on Feb. 22, a gathering of friends, family, and co-workers of Patrice Matthews-Faison gathered in front of Central Middle School on Thursday evening (Feb. 25) to share stories and shed tears as they remembered the local woman who was murdered Jan. 22 in Ahoskie.

Her killer remains unknown as Ahoskie Police continue to work the investigation.

Those in attendance were given glow sticks in an effort to vividly show the colorful life that Matthews-Faison led. 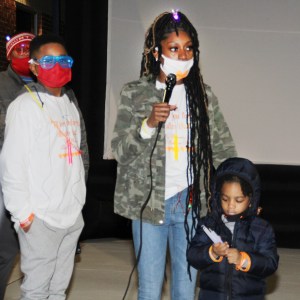 Ari Matthews – joined by her brothers, Tre (left) and Junior – spoke on behalf of the family of Patrice Matthews-Faison at an event held in her memory on Feb. 25. Staff Photo by Cal Bryant

“We wanted to allow people to share their memories of Patrice,” said Susanne Stallings, a friend of the murder victim. “All we want right now is justice for Patrice. We want to say her name over, and over, and over and celebrate one of the best friends you could ever have.

“It’s okay to shed tears over the pain of losing a friend, but it’s also okay to laugh and enjoy all the wonderful memories we have of her,” Stallings added. “No one loved to laugh more than Patrice…those who knew her can attest to that.”

Stallings was joined by Chante Jordan and Courtnay Jordan in helping to stage the event.

Crystal Saunders offered words of comfort and encouragement in prayer. She gave thanks to God for “covering Patrice’s children” and to grant them a “special dose of comfort.”

Saunders cried out for justice for Patrice.

“Her life was not in vain,” Saunders prayed. “We are claiming victory right now God in the name of your son, Jesus. You said there is nothing hidden that will not be revealed; nothing in secret that will not be manifested.”

Two of Matthews-Faison’s close friends spoke about their relationship with her.

“When I first moved to Gates County, one of the first people I met, other than family, was Patrice,” stated Sarah Underwood. “We hit it off right from the start…something clicked between us.”

Underwood encouraged those in attendance to reach out to those close to you and let them know how much you love them.

“Tomorrow isn’t promised to any of us; don’t put off what you can do today,” she stressed.

She told the children of her late friend to understand the support system they have.

“You’ve got a community behind you,” Underwood remarked. “Regardless of your needs, we will provide.”

“Patrice always had our backs,” she said, fighting back the tears. “She was always there when I needed her. Just being around her would make me feel better. She would give her last for me….for anybody. 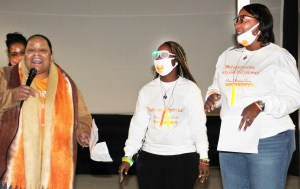 Monique Gatling (left) served as the spokesperson for the Gates County High School Class of 2000 at the memorial event. Patrice Matthews-Faison was a member of that graduating class. Staff Photo by Cal Bryant

Another close friend, Whitney Smith-Johnson, said she and Matthews-Faison were sisters in Christ.

“We were on a spiritual journey together,” Smith-Johnson shared. “We encouraged one another, we leaned on each other.”

She added that her friend was always there “to pick me up. When I battled with low self-esteem; when I struggled; when I walked with my head down, Patrice was the one who told me to pick my head up and move on. I want to tell others today that no matter what you’re going through in life, hold your head up.”

Smith-Johnson said Matthews-Faison came to her house earlier in the day on Jan. 22.

“She bought me some anointing oil after I shared with her that my daughter had a dream that she [the daughter] had died and saw heaven,” Wiggins recalled. “I was scared. I told Patrice we needed to pray and she bought her last bottle of anointing oil. That was the bond we had; when I called her, she was there; when she called me, I was there.

“I feel that my friend’s dignity was snatched away from her when she left this earth, but I’m here to say that she was a woman of integrity,” Wiggins closed.

Matthews-Faison’s memory was honored by a group of her fellow Class of 2000 graduates from Gates County High School. Monique Gatling spoke on behalf of that group.

“I remember getting in trouble in high school and I had to do 200 hours of community service behind, now get this, an ink pen,” Gatling recalled. “Well, Patrice, being the jokester she always was, kept me with a stockpile of ink pens from that day forth. I still sit at my desk and write with one of her pens daily.

“Patrice loved the class of double-0,” Gatling continued, “and we all loved Patrice. “Her infectious spirit will be truly missed.”

“Patrice was the type of person you could share things about your life,” he stressed. “She would encourage you. It’s all about love; and now, no matter what happened, that love doesn’t end. And also what doesn’t end is seeking justice for Patrice.”

Two of Matthews-Faison’s co-workers at Rivers Correctional Facility near Winton told stories about their colleague.

“We continue to pray for her family,” said Standra Swain. “We all know the person Patrice was…a woman of integrity and a great woman of God. She was always there for all of us.”

“She was my supervisor and what a joy it was to work together. She didn’t micromanage; she loved everybody and everybody loved her. We miss her every day, but we know God is in control and God will work it out,” Lassiter stated.

“It hasn’t been easy for us, but we would like to say thank you to everyone for all that you’ve done. This means a lot to us because our mom glowed every day,” she noted.

A group of close friends wore sweatshirts containing short phrases of advice once shared by Matthews-Faison. They each recited the message on those shirts as the event concluded.

Matthews-Faison, 38, was shot as she sat in a vehicle parked at the old Sunoco gas station located just across the Ahoskie Creek bridge on NC Highway 42 West. That gas station has been closed for a number of years.

She died at the scene, according to the Ahoskie Police.

There was no information made available as to a possible motive for the murder.

Asbell encouraged anyone who may have saw or heard something around 8 pm on Friday, Jan. 22 in the area of the murder to please contact the Ahoskie Police Department at 252-332-5011.

“Your name will be kept confidential; all we need is any information you can share on this case,” said Asbell.

Less than a week prior to her murder, Matthews-Faison held a drive-thru parade in the Central Middle School parking lot to honor her 13-year-old son who is a student-athlete at that school. He had battled and overcame the ill effects of MIS-C, a condition that is possibly linked to COVID-19.