One journey ends and another begins

RICH SQUARE – Where did the time go…..Sallie Surface keeps asking herself that question as the 38-year veteran of Choanoke Area Development Association (CADA) eyes the end of a long and productive career of helping those in need.

Surface, who was first employed by CADA in 1983 as its Manager of Community Services, has served the organization as its Executive Director since 1990. She plans to retire on June 30 of this year.

“There is never a good time to retire since you will always have something you want to accomplish before you do,” said Surface. “You just reach a point when you decide this is the time.” 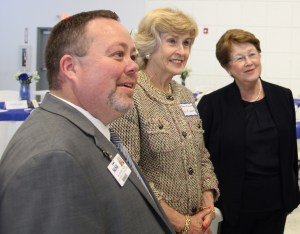 She admitted that the next few months will run the gauntlet between sadness and happiness.

“The daily interactions with staff will be missed,” she noted. “I’ve been very fortunate to have had a job that I enjoyed and thought that we, as an agency, were making a difference in the lives of others and improving our communities.

“One does not travel alone, and I want to thank the [CADA] Board, staff, and partners for the opportunity for this journey, and the support they provided on the journey,” Surface continued. “There have many mentors during my 38 years, and I hope that I have been and can continue to be a mentor to others.”

Even when June 30 arrives, Surface said it will be difficult for her to stop thinking about the needs of the region or what might be a resource or a new partnership.

“I will be available as needed to assist with special projects, etc. I have a favorite saying, ‘Bloom where you are Planted.’ I hope that has been true of my tenure at CADA and will be true of my next journey,” she noted.

Following in the footsteps of those visionaries who founded CADA in 1962 on the basis of promoting, through regional cooperation, the industrial, agricultural, recreational, educational, general economic well-being, and health and welfare of the citizens of Bertie, Halifax, Hertford, and Northampton counties, Surface has witnessed the organization experience substantial growth. She highlighted a handful of the most substantial projects as follows:

CADA continued to operate the Weatherization Assistance Program that was expanded by new technologies.

In 1996, CADA received an award from the NC Housing Finance Agency for rehabbing over 600 houses in the Single Family Rehab Program. CADA continues to operate this program and rehab homes in all five counties. Partnering with USDA Rural Development has also provided additional resources for rehabilitation of homes and for homeownership.

CADA became and continues to meet the requirements to be a HUD Certified Housing Counseling Agency. These classes enable many families to correct credit problems so they may become homeowners.

CADA developed an additional phase of the Southgate Subdivision in Roanoke Rapids where 10 new affordable homes were constructed.

CADA developed Choanoke Meadows, a subdivision in Rich Square where 14 affordable homes were completed and occupied during the first phase.

The conversion of the historic Woodland-Olney School into 30 senior apartments was completed in 1998 under CADA’s guidance.

Other projects include the Parents as First Teachers Program in Hertford County; a Family Resource Center in Garysburg; the Support Our Students Program (SOS) at Garysburg Elementary School and Rich-Square-Creecy; and the Welfare to Work Program that provided support services and work experience for families that were receiving assistance to move them to self-sufficiency.

CADA was also at the forefront locally following Hurricane Floyd in 1999, serving as the Housing Disaster Recovery Center to assist storm victims complete applications and secure assistance. CADA staff also assisted storm victims to secure the use of temporary FEMA units until their housing needs were resolved. It also assisted the local counties to apply to the Redevelopment Centers for Crisis Housing Assistance Funding for the Repair and Replacement Program. CADA repaired/replaced 205 homes under this program.

CADA began an expansion of the Section 8 Program to provide homeownership opportunities for participants. Those who qualify have the opportunity to have their rental subsidy applied to a home mortgage payment each month. This program began in July 2002.

As the non-profit developer, CADA, with the assistance of many partners, developed the historic Enfield School into 36 senior apartments. This adaptive re-use facility opened in the fall of 2011.

Surface said there would be gaps in the continuum of services needed and these gaps would impact the quality of life for many residents if CADA didn’t exist.

“The money these agencies bring into the region keep turning over and over in the economy, and then there is the benefit of the money these programs leverage for the region,” she stressed.

A visible change without CADA, she noted, would be the lack of housing options and standard housing, an increase in homelessness, more evictions and foreclosures, seniors needing to move to facilities since their homes had deteriorated, fewer new homes and opportunities for homeownership, utility bills not being paid and families without electricity and heat.

She also said that the lack of Early Childhood Development and education programs would disrupt the local way of life.

“CADA has existed since 1962, almost 60 years, because the mission of this agency is still relevant today,” Surface said. “If we live in a world where the needs of people were being met, CADA and similar agencies would not be needed. However, CADA and others have not worked themselves out of a job.

“An organization must change or be left behind,” she added. “CADA will need to continue to understand future changes and to prepare staff for those changes.”

In closing, Surface was asked what advice would she give to the next CADA Director.

“I would first welcome the individual to an opportunity to make a difference in the lives of many and to be rewarded by knowing that CADA is making a difference,” she said. “I would encourage the new Executive Director to review CADA’s history to understand where CADA has been and where it is going; to review the systems that CADA has in place to implement services and protect resources; to understand the governance of CADA as a Community Action Agency; to meet CADA’s partners and understand the shared visions/ missions of the partnerships; to visit with staff and tour facilities; and work with the Board to review the Strategic Plan and make changes that move CADA forward.”

Prior to coming to CADA, Surface worked in a Summer Head Start program in Bladen County in 1966. Between 1966-1982, she taught Social Studies and Language Arts in high schools and middle schools in North Carolina and Virginia. She also worked at what was then Chowan College with a new program for First Generation College Students.

The CADA Board of Directors has launched a search for a new Executive Director.