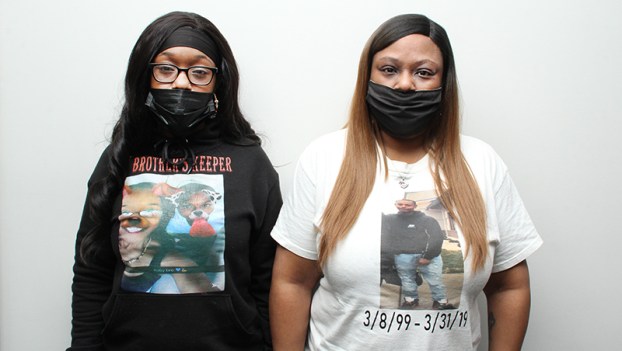 Alexia Knight (left) is joined by her mother, Tonya Knight, as they remember the life of their brother and son, respectively, by wearing shirts commemorating the memory of Armin Cherry who was murdered in Ahoskie two years ago. The killer remains at large. Staff Photo by Cal Bryant

Around 8:30 p.m. on March 31, 2019 in Ahoskie, someone walked up to a parked vehicle occupied by 20-year-old Armin Trevon Cherry, drew a weapon and ended the life of a young man.

Twenty-four months later, no one knows who pulled the trigger, but that doesn’t stop Tonya and Alexia from asking questions about what happened that night.

“It’s still hard on us,” said Alexia. “Armin was such a loving person. He’d do anything for you. He was always happy, jolly; he was funny and very outgoing.”

At the time of his death, Cherry had just landed a full-time job and was, according to his sister, “getting his life straight.”

“He came to the house that day around 1 [pm] to see his little brother. He told us that he loved us…..it was like he knew something was going to happen to him,” said Tonya, her voice filled with emotion as tears poured from her eyes.

“He left and I didn’t hear anything else from him,” she continued. “The next thing I know we saw on social media that he was dead. Nobody called us or nothing.”

The shooting occurred in the back yard of a residence located at the intersection of Catherine Creek Road and Everett Street. The Ahoskie Police and the North Carolina SBI launched an investigation.

Tonya Knight said not much information has been shared with the family from local law enforcement.

“I feel they could be doing more to solve this,” she insisted, adding that her son was in the vehicle with another individual who exited the car to go inside a residence. The shooting occurred shortly after that point.

“They [police] told us they didn’t feel this was a set-up, that the person who left Armin alone in the car was unaware of what was about to happen,” said Alexia.

Two months after the murder, Tonya, Alexia and other family members left Ahoskie to start a new life in Craven County.

“We feared for our safety,” Tonya explained about the need to relocate. “There’s a murderer walking around and we didn’t know who it is.”

“We’re asking anyone who has information about Armin’s murder to contact the Ahoskie Police Department,” said Alexia. “Think about what if that was someone you loved; someone in your family. You would want some type of closure; you would want justice.”

Asked what she would say to the killer if that person is arrested, Tonya again fought back the tears, saying, “All I would ask is why did they do it; what did he do that was so wrong that they had to take his life.”

Despite knowing that Armin Cherry’s life was ended by gun violence, Alexia said she doesn’t believe that gun control is the answer.

“It’s all about a person’s mindset; some people believe there’s no chance to talk things out and they’ll pull out a gun instead,” she stated. “They just get straight to the point, but that point is to pull a trigger.”

“No matter what, if you took all the guns away, a person will find a way to get another one,” added Tonya, “whether it’s legal or not.”

Now, the only thing left for Tonya Knight and her family is to cling tightly to the memories of their loved one. They gathered on March 8 (Armin’s birthday) to release balloons and will do so again today (Wednesday, March 31) on the second anniversary of his tragic death.

“This has brought us closer,” Tonya said of her family, which also includes an older son. “All we have is our memories and our love for each other.”