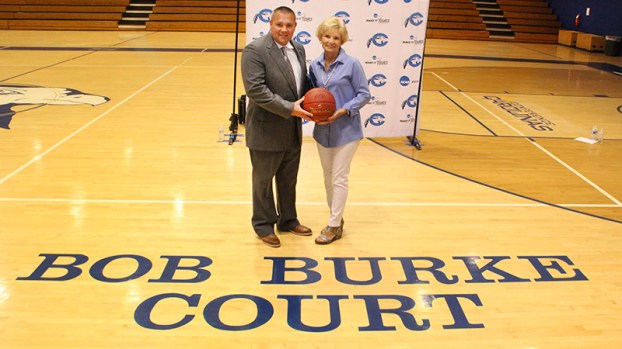 Rob Burke is joined by his mother, Jane, as they stand on Bob Burke Court inside the Hawks Athletic Center at Chowan University. Staff Photo by Cal Bryant

MURFREESBORO – After a near 20-year absence, a Burke will once again stand inside the coaching box here at the Hawks Athletic Center.

The 43-year-old is the son of legendary coach Bob Burke, who won 419 games and took his teams to three national championship tournaments and one Final Four during his Hall of Fame career at Chowan. Rob, a guard, played for his now late father at Chowan from where he earned a Bachelor of Science Degree in Sports Management with a minor in Business Administration in 1998. 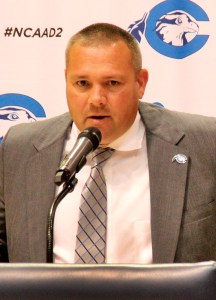 Rob Burke is a native of Hertford County and a 1998 graduate of Chowan University. Staff Photo by Cal Bryant

The court at the Hawks Athletic Center was named in Bob Burke’s honor in 2016.

Rob Burke said he isn’t intimidated by his father’s legacy at Chowan. Rather, he sees it as a challenge.

“He drove me to be competitive, even against him,” Burke stressed at Monday’s press conference. “He taught me to not back down, so I look forward to stepping on this court that’s named for him and taking Chowan’s men’s basketball program to another level.”

It’s the level of intensity and passion that flows within his veins that drives Rob Burke.

“I can be obnoxious; I can be loud; I just want to bring my 22 years of coaching experience and put it on the floor with the guys committed to coming here to receive a great education, to grow as men, and becoming better basketball players,” he said. “I’m going to sweat with our guys; I’m going to lift [weights] with our guys; once they come through the doors of this gym I won’t ask them to do anything that I won’t do myself.

“I want to ask this town and this community to get behind us and push and drive us,” he continued. “We’re going to recruit right here locally and in our state, up in Virginia, and nationally. I want players who will sacrifice themselves individually for the good of the team. It’s going to take passion and commitment. When we do those things we will have a chance to be extremely successful here.”

“I’m so humbled to be here today, here back home in Murfreesboro at Chowan University,” said Burke. “It’s a great opportunity to chase my dreams, a dream that all started for me right here in this gym.”

“We feel we have an exceptional coach that will recruit good students, good citizens, and very competitive athletes,” he said. “What I expect from all of our coaches is that they have faith in our students, faith in their [athletic] program, and continued faith in Chowan University’s future.”

“This is a great moment in Chowan athletic history, with the legacy of the Burke name continuing here,” stated Mashuda. “I am excited to be a part of that history here and look forward to supporting Rob while he carves out his own name in coaching history here.”

As the son of a coach, Rob Burke has been around the sport of basketball his entire life, to include playing at Hertford County Middle School and Hertford County High School.

“This gym, this university, this town, this community made me who I am today,” Burke acknowledged. “For those out there chasing their dreams, don’t let anybody tell you that you can’t do it from a small town.”

Burke noted that the sport of basketball has carried him across the world, to include Italy and France. Within the United States, he’s traveled from the Atlantic to the Pacific. He coached from the bench at the famed Dean Smith Center, and at Cameron Indoor Stadium.

“As a kid, I couldn’t wait to grow up and get out of Murfreesboro; now as an adult I’m so, so excited to be back home,” he stressed. “When I talk about chasing my dream, that included having the chance to come back here and coach at Chowan.”

He credited both of his parents for providing him with motivation and direction.

“My dad cracked the whip; he drove me, he pushed me to be the best you can be,” Burke stated. “He let me know that 419 [wins at Chowan] was his number and I had a lot of work to do if I wanted to match or exceed that. I’m chasing that number.

“Sure, my dad had an impact on my life, but he did that for other players as well,” Burke continued. “And he didn’t just make them better basketball players; he molded them into better men, ones that became good fathers and husbands. I want to do that here at Chowan.”

“My mom is a leader; she led by example and with great passion,” he said of Jane Burke, a retired educator who once served as Principal of Hertford County High School and later as Superintendent of the county’s public school system. “She held me accountable and taught me to do things the right way.”

Burke said he built upon the foundation laid by his parents to become, “who I am as a person, as a father, husband, and a leader of young men.”

He also praised his wife, Neily (also a Chowan graduate), saying, “Thank you for allowing me to chase this dream. Thank you for sticking beside me and raising our two beautiful children.”

Along the way, Burke said he received expert advice about the game and about life from others. He signaled out his high school coach, Charles Simmons; and collegiate coaches Larry Epperly, Billy Lee, Chuck Driesell, and Jeff Conarroe.

“It was a blessing to be around all these men; they each taught me how to do things in a first-class manner,” Burke noted.

After stops at Limestone College and Campbell University early in his coaching career, Rob Burke spent six seasons as the head coach at Spartanburg Methodist College (SMC). There he piloted the Pioneers to a 112-67 record and averaged 19 wins per season during his time in Spartanburg.

Overall, Burke graduated 94 percent of his players at SMC.

He also spent five years as an assistant coach at The Citadel and later served as Director of Basketball Operations in 2015-16 and 2016-17 at Georgia Southern.

From there he moved to UNC-Wilmington, named as the Director of Basketball Operations in May of 2017 and promoted to assistant coach for the 2018-19 season. He served as interim head coach for the Seahawks to close out the 2019-20 season.

He was an assistant coach at Colorado College prior to being named as the new head coach at his alma mater.

Burke and his wife are the parents of two daughters, Mina, 23, and Marissa, 13.