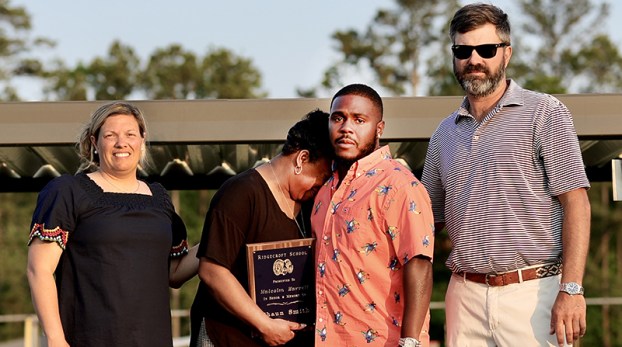 Shannon and Malcolm Harrell (pictured center), the parents of the late VaShaun Smith, were the first recipients of an award in their son’s honor at Ridgecroft’s athletic banquet on May 20. Joining them on stage for the presentation were Susan Colvin (left) and Chris Chamblee. Photo by William Anthony

AHOSKIE – A young local athlete and assistant coach who was murdered earlier this year was posthumously honored with an award in his name at Ridgecroft School’s annual athletic banquet on May 20.

VaShaun Smith was a student and football player at Hertford County High School before his death. But he also helped out as an assistant coach for Ridgecroft’s junior varsity boys basketball team, where his father Malcolm Harrell serves as the team’s head coach.

“We wanted to do something to honor Shaun Smith,” said Ridgecroft Athletic Director Susan Colvin. “He made a great impact on our athletic program and our student athletes.”

Harrell was the first recipient of the award at last week’s event, which is planned to become an annual honor. Colvin said the Harrell family will be involved in choosing the recipients in the future.

“We are honored to award an individual that has some of the same characteristics as Shaun such as leadership, positivity, sportsmanship, and faith,” Colvin explained.

Smith died on Feb. 26 after he was shot outside his home in Ahoskie. The shooter turned himself in to law enforcement shortly afterwards.

The community mourned the death of the senior, who was also a member of the Hertford County High School Beta Club and an active participant in his church, Mt. Sinai Missionary Baptist Church in Como.

A motorized bike parade hosted by the GBG Bike Group was held a week after his death as a tribute to Smith. The event’s slogan was “Guns Down, Bikes Up” to promote an anti-gun/anti-violence message to the community.