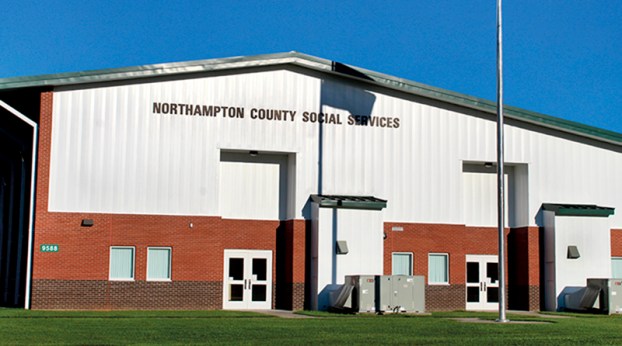 The Northampton County Department of Social Services building was closed Wednesday, Thursday, and Friday of this week as a contractor began the process of removing mold apparently caused by a faulty HVAC system. Staff Photo by Holly Taylor

JACKSON – The Northampton County Commissioners approved a plan to remove mold from a county office which houses the local government’s department with the most employees. An emergency resolution was passed to address the issue at a special called meeting here on Aug. 30.

“We’re coming here tonight to solve a problem that must be solved,” stated Board Chair Charles Tyner, who is also serving as the Interim County Manager.

He added that people had already reached out to let county officials know about the mold problem, and that the commissioners didn’t want anyone to be working in an unsafe environment.

“Thank you for bringing it to our attention. We got on it as soon as we heard about it,” he continued. “We’re not looking for a short-term [solution] either. It’s got to be long-term.”

The mold itself was found in the Department of Social Services (DSS) building, which opened in 2013. According to Northampton County’s Interim Public Works Director Becky Turner, the mold is being caused by high humidity in the building which stemmed from a problem with the air conditioning system.

Turner then called Servpro, a cleanup and restoration business with a local office in Roanoke Rapids, for assistance with the problem.

“They came in and took air samples throughout the entire DSS building,” she explained.

On the same day, the company provided several dehumidifier and air scrubbers to keep the problem from getting worse. Those units are still in operation in the building, continuing to bring down the high humidity levels.

According to their air samples, some parts of the building were at 95 percent humidity levels.

Baldwin agreed with the Public Works Department assessment that the air conditioner was the source of the problem. But even if Servpro removed all the mold, he cautioned that it would come back if the AC problem isn’t fixed.

Tyner asked Anthony Wheeler, the county’s Building & Grounds Supervisor, about the AC units in the building. Wheeler confirmed that those were the units which were originally installed in the building when it was constructed.

Baldwin presented three invoice options for the commissioners to choose from. The first was $59,000 to cover the costs of what work Servpro had already been done so far, such as taking the air samples. The second invoice option was for $230,000. That includes the amount from invoice #1 as well as the cost to thoroughly remove the mold from the worst parts of the building. The third invoice option was for a little over $263,000 and would include all of the work from the other options but also add extra cleaning to other parts of the building where the air samples were better.

Northampton County Finance Officer Tameka Green stated that the funds for this work would come from the county’s Fund Balance.

Commissioner Geneva Faulkner read an emergency resolution provided by the county attorney which noted that competitive bids were not required because it was a special emergency involving public health and safety. She motioned to approve the invoice #3 option in the amount of $263,266.63.

Commissioner Joyce Buffaloe provided the second, and the vote was unanimously in favor. Commissioner Nicole Boone was not in attendance to vote.

As for the next steps, Tyner directed the Public Works Department to contact the company that installed the HVAC system in order to get that problem fixed as soon as possible too.

“I promise you it will be taken care of,” Tyner emphasized. “Keep us informed when things happen.”

According to Northampton County DSS Director Rhonda Taylor, the office will reopen to the public on Tuesday, Sept. 7.